August 31st was a beautiful day in my life, because it meant that Life is Strange: Before the Storm would finally be available! And yes, you better believe that I consumed that first episode faster than I’ve consumed anything in my entire life (and I used to inhale pizza at the speed of light.) All of my expectations for that first episode were fulfilled, and beyond. It gave me all of the feelings I would expect after playing the first installment of this series, and it’s leaving me with strong feelings of yearning for the next one. There are so many aspects of this game that gave me so much life, and based on what I’ve seen, I already have a ton of predictions for what could happen.

(This won’t be spoiler-free. Sorry not sorry.)

The introduction to Chloe Price in the events before Max returns to Arcadia Bay is exactly what I hoped for. The fact that she snuck out of her house to go to a concert that she’s too young to go to, combined with the game mechanics making it so you have to sass your way into the bar, was such a promising way to open this beautiful game. When she made it into the bar, and was saved by the mysterious and elusive Rachel Amber from two god-awful douche bags, I became immediately intrigued. We finally see the figure from the first game from whom we only heard stories about, and she’s…maybe a little different than we expected? But of course, she’s the mysterious and elusive Rachel Amber, so she’s a complex, dynamic lady who’s more than just some punk teenager who sneaks into concerts that aren’t open to minors. Turns out, she’s kind of popular and is actually an honors student? I mean, dang! I already had so many questions about her. 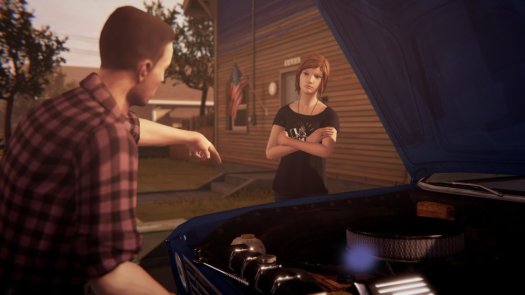 Though we already had a glimpse into Chloe’s home life in the first game, seeing it again through a different perspective revealed so much more about her character. The rude way she talks to her mom when no one else is around, and the way she treats David (who’s not nearly as bad as Chloe would make you believe) speaks volumes about how jaded she is. We caught a bit of this in the first game when Max comes over to her house, but because we saw everything through Max’s point of view, what we see of Chloe’s personality in Before the Storm will be much different. That’s not to say what Max saw was wrong, it’s just that there’s a side that Max wouldn’t see, since the whole “what goes on behind closed doors” phrase is usually accurate. Getting to see Chloe’s home life directly from her own eyes, though a necessary part of this game, was still very enlightening because of just how multi-faceted she is as a character. There are so many traits to unpack, that getting to see her development from her own perspective adds to the strong narrative of this game.

Something I didn’t expect from this game, which I grew to love, was the “vision quest” flashback dreams that Chloe has from time to time. The idea of her dad’s spirit being with her to guide her through her struggles is such a good concept for her story. She looked up to her dad so much when he was still alive, so it seems natural that he would still be there to guide her through the rough patches of her life. I’m still on the fence about whether this part of the story involves supernatural elements, since the first game established that there are those kinds of forces in this world, or if it’s just something internal to help Chloe make decisions. Whether supernatural or not, I think this adds so much to her development, and it will be a something to look forward to, as far as how they will change as the game progresses. I mean, we saw Rachel burst into flames in one of these visions after the two of them had a big fight; I can only imagine these visions will get way more intense.

Of course, where would this post be without my thoughts on the main event of this game? I’m talking about Rachel Amber, of course. I know that’s the aspect of the game that I was most excited to see, and given that she was the biggest mystery to unfold in the first Life is Strange, I’m sure other players felt the same.

The conflicts with Rachel are not nearly what I expected them to be, but they’re still everything I could have asked for. Seeing her and Chloe bond, flirt, and steal strangers’ wine was so uplifting and charming, and gave me all of those good feels that I was hoping for. They brought a lot of complexity to her character, with her being an honors student who’s trying to find some wiggle room to become a rebel in light of some tragic events happening at home (her dad cheating on her mom). I love the idea that we’re seeing Rachel grow more and more cynical after witnessing these events, because Chloe had gone through a similar transformation, thus their connection would become much stronger. The fact that their relationship was born out of tragedy seems very fitting for how both of their stories will end.

Also, when Rachel is screaming into the abyss after deciding that setting forests ablaze would be a great way to express her rage, did you notice that her screams seemed like they could be…supernatural? Like they caused the winds to blow a bit harder? I won’t be mad if they make her some sort of supernatural entity, but I’m definitely intrigued as to whether or not that was what we actually saw.

The first episode was loaded with story elements, leaving us wondering what could happen next. I definitely feel like Chloe and Rachel will have a moment where their interest in each other is solidified. Whether it’s a kiss, or a look they give each other, or something they say to another character, I think something will confirm that they have very strong feelings for each other. I think Chloe’s visions will continue to get more intense, but I feel that the visions are more meant to show that her rebel spirit will grow too strong for any sort of guidance from her past (given how rowdy she is in the original Life is Strange). I do predict that Rachel might have some sort of supernatural element to her, and that could tie in to why she disappears. I predict that the woman Rachel’s dad had an affair with will have a more pivotal role in the story, as we caught a glimpse of her nonchalantly smoking while the forest was going up in flames.

Ultimately, I predict a whole bunch of feelings. Lots and lots of feelings that’ll punch me right in the heart, and I’m SO here for it.

Have you played Life is Strange: Before the Storm? How do you feel about it, and what predictions do you have for the rest of the game? Let’s talk about it in the comments!

2 Replies to ““Life is Strange: Before the Storm” Thoughts and Predictions”

Would I be happier with a human person I could cuddle with during this quarantine? Sure. Am I still blessed that THIS is the silly boy I get to be trapped with? Absolutely 💖 . #gayswithcats #catsofinstagram
It’s gonna be really interesting seeing what my hair will look like with two months of growth after my last haircut 😬 Will I love it? Will I hate it? Will I have a full Britney Spears moment and shave it all off? Stay tuned to find out!
Happy #TransDayOfVisibility, everyone! In a time where it’s hard to physically be here for our trans friends and family, it’s so important to be showing them love in the ways that social media allows us to. Call out transphobia when you see it. Stand with our trans siblings on the issues that are important to them. Being an ally is not just saying you’re there for them, but SHOWING that you stand with them. I love you all, and I see you. You’re beautiful, powerful, and important 💙💖🤍
Thought this deserved a spot on Instagram, too. No matter where you identify in the queer spectrum, you ARE enough. I had so many years of wondering if I was “gay enough” to be worthy of having a spot in the community, but just by being me, I’m enough. That’s all I need. And that’s all YOU need, too 💖
Can you believe I’ve been streaming on @Twitch for a whole 3 years? That’s BONKERS. I’m going to be live for a whole 12 hours today to celebrate (which means I’ll be live until 10pm PST!) We’re starting with a clip viewing session of the 3 past years of streaming, then we’ll be playing Animal Crossing together, and then doing some spooky games! I also have giveaways going all day, INCLUDING a copy of Animal Crossing: New Horizons! I hope to see you there! 💖
This might be one of the most delightful moments I’ve had while playing #AnimalCrossingNewHorizons The fashion is everything, and our goal is to ALWAYS serve looks 💅🏼 twitch.tv/jeffbrutlag . #ACNH #AnimalCrossing #gaygeeks #gaymers
%d bloggers like this: