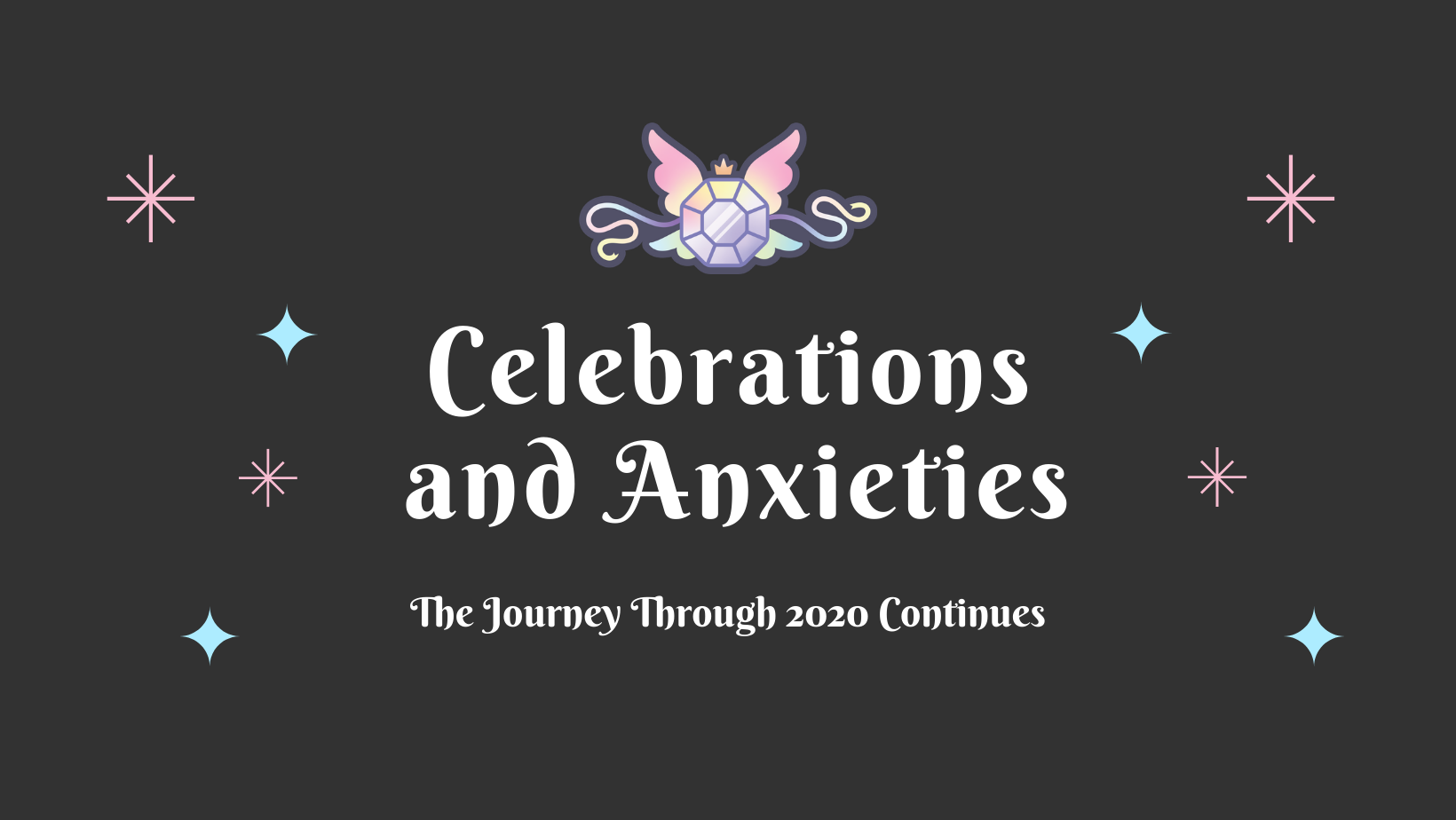 I’m not gonna lie, I have been stressed. So before we talk about the good things that have been going on, and what I’m planning, let’s get some of the stressful stuff out of the way.

COVID is still stressful as heck. Cases are still going up, and it’s making me so anxious. Wear a mask, stay home as often as possible, and if you’re going to go out, again, WEAR A MASK.

This update is also coming at you post US election results, and I’m very relieved about the results. Another four years of the bigoted Cheeto would have just added to the stress, and in seeing Biden and Harris graciously accept their election, I realized just how much Trump’s presidency weighed on my mental health. There’s still a lot of work to be done, especially regarding marginalized communities, but I will definitely be relieved once Inauguration day comes.

Oh, and if you voted for Trump, you voted against my rights, the rights of POC, and so many marginalized communities. We’re not obligated to make amends with the choice you made.

I have way more to say on these topics, but a lot of the views regarding these things can be found on my Twitter. I may be a quiet individual on the streets, but put me in front of a keyboard, and suddenly I have a LOT to say.

The good news is that I seem to be on an upward trend of success, right now, which is wild! Wild more so because it’s been a lot to keep up with, and I’m still a bit in disbelief that it’s even happening.

For those who haven’t heard yet, I recently became a Twitch partner, which is no easy feat, in the Twitch world.

It took me just a little over 3 years to get here by streaming story driven games, horror games, Nintendo games, and the like. Some days it felt like a grind, but I got there. And it felt so damn good to get there.

This means more opportunities to work with Twitch. This means more benefits to offer my community members that support my Twitch channel. This means companies who see my channel will take me just a bit more seriously, because I have that seal of approval from Twitch saying that I’ve put in the work. For someone who’s making their career in content creation, this is huge.

And I still find myself wondering if it even happened. Impostor syndrome keeps telling me it wasn’t my talent, my hard work, or anything I actually did to get me here. I could dive into my psyche and really extrapolate on why that is, and it would add up to a long history of my achievements not being important to some key people in my life, but the fact of the matter is that I did it. Impostor syndrome or not, it happened. I’ve got that check mark, and you better believe I’m planning on continuing to make this platform of mine even stronger, and create content that continues to grow in quality.

I recently also raised over $2k for Trans Lifeline! Doing charity work with my Twitch channel is always so fulfilling, and every time I do another charity stream, I’m constantly reminded of how much good I can do with my platform. It reminds me just how supportive my community in wanting us to succeed, and I hope that it shows anyone who looks down on streaming careers that it’s far more than just playing video games in front of a live audience.

I’ve recently also been featured on the front page of Twitch for several different occasions! This is something that never usually sinks in until moments after the event is over, but when I actually sit and think about it, it’s so wild. Me? A wildly gay dweeb? On the front page of an entire livestreaming platform, not just once, not just twice, but three times, recently? Just thinking about that is making me overwhelmed with gratitude.

The first of those front page events was for Hispanic Heritage Month, and I played the original Silent Hill, a game kicked off one of my favorite series of all time. What a joy it was to celebrate my heritage, being an openly latinx, gay person on the front page of a website consisting primarily of gamers (a subculture that has a lot of work to do with inclusivity), thriving and sharing a game that has meant so much to me. Not to mention…at one point, I had over 10k people watching me. Like?? Hello???

The second one was for an event with Gamers.Vote, an organization that works to mobilize gamers to get out there and vote! With the election that happened recently in the US, it was so important to me to get involved in encouraging my community to vote, and use my platform for actual change, in this country. Because our right to vote has such a direct impact on things that go on in our country, it’s so important to encourage people to use it. The fact that I got to represent them, and hopefully sway tons of people into actually using their voice, was absolutely incredible.

The most recent of these front page events was the Queer Black Excellence x Rainbow Arcade Summit! I’m a part of a Twitch team called Rainbow Arcade, a team made exclusively of queer-identifying individuals, and they put together a two-day long summit full of panels with tons of important conversations around being a queer content creator, intersectionality, race, streaming with disabilities, and so many more topics!

The panel I was on was about games with difficult content, such as video games where queer trauma is used as shock value or a driving plot point, as well as triggering content that deals with abuse or self-harm. It was so amazing to be a part of this with five other incredibly talented individuals, sharing my experiences with games like this, and helping others understand how to better protect their communities from potentially triggering content. As someone who constantly undermines their own worth, the fact that I was wanted for my wealth of knowledge on a topic felt so validating.

So that’s all of the good things that have been happening, recently. Which is quite a lot! And I’m grateful! However, some things have been…not as great. Not terrible, but enough for me to notice.

While my Twitch channel has been popping the heck off, I’ve been doing such little writing, lately, which has been hurting my poor little writer heart. This pandemic, on top of the election, on top of managing my own mental health, on top of how much creative energy I’ve been pouring into my work, I find myself pushing back my writing more and more. I hate that I keep doing it though, because writing is the thing I have such a passion about, and would love to be able to do on a more professional level.

I toyed with starting NaNoWriMo this year, but it just doesn’t feel like the year to do it. I’ve been drained as of late, and pushing myself to run the well dry for 50k words just doesn’t seem like a good use of bandwidth. I mean, as I’m writing this post, we’re already two thirds into the month, and I barely just started brainstorming for the project I want to do. At this rate, I know I’d be a long ways away from reaching that finish line. I know that simply starting the novel is the idea of the whole event, but I just need to be writing, and not necessarily under the pretense of getting 50k words written in a month.

But don’t you worry! I’ll still be writing, because I’ve got lots of ideas up my sleeve!

I would also like to be more active with publishing Medium content around social justice/current events-related things, and keeping this blog here for more general, day-to-day (or week-to-week, more realistically) thoughts around content creating, life, and all that jazz. A little more of a conversational, personal blog to keep you all up to date on what I’m doing, and how I’m feeling about it.

It’s just been hard, you know? It’s felt like a ton of weight just keeps piling on, and right when I sit in front of the computer to start other projects, it’s like all that weight suddenly reminds me that it’s there, and tells me I should lay down and play a video game, instead. I know I sometimes have to listen to that little voice, because sometimes it’s a plea for rest, but other times, it’s self-sabotaging, and it would serve me better to just create.

I’m not sure how many others are still feeling like they’re in this rut, because I know it’s been a continuous thing, for me. Any time I feel like I might be out of it, it comes back at double the weight. But I just have to remember that it’s okay. It’s normal to feel overwhelmed, and it’s normal that we’re all struggling in some way because, well, that’s just what a virus going global will do. On top of a very stressful election. On top of…literally anything else we could have going on.

Take care, be gentle with yourself, and celebrate as much as you can, even if it’s just making your morning cup of coffee. The world is stressful, but you’re allowed to take a bit of a break from it, every now and then, and recognize how much you’ve accomplished.