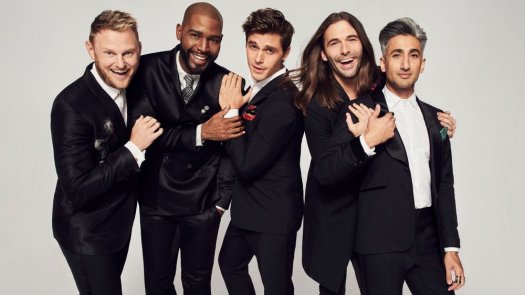 When I watched the first episode of Queer Eye, I loved it so much, I knew I’d want to gush about it in the form of a blog post. So of course, I proceeded to binge the rest of the first season, calling it “research.” A friend of mine who’s published two books said that it counts, so I’d say that 8-ish hours of binge-watching was justified.

For those who aren’t aware of the show, or who haven’t seen its predecessor, Queer Eye for the Straight Guy, the show centers around five gay men called “The Fab Five,” and in each episode, they’re tasked with improving the image and lifestyle habits a different guy (who’s usually straight). Each of the fab five members specialize in different aspects of lifestyle, the categories being food and wine, home decor, fashion, culture, and grooming. They spend about a week with these guys, giving them tips and tools on how to make themselves look and feel better to improve aspects of their life that are making them feel stuck. It’s like a home improvement and make-over show all in one series. Neat!

Though I never watched a whole episode of Queer Eye for the Straight Guy, I found the title revamp to just Queer Eye was a great nod in the right direction, as far as showing progression. It already gave the impression that it was less about contrasting straight men and gay men, and more about simply offering their perspective in the guys’ worlds. The old title felt very much like “I have taste because I’m gay, and you don’t because you’re straight,” and I feel like that put both communities under an false, wide-spread generalization. It immediately gave the impression that the show was more about showing similarities, rather than pushing gay men into that “other” category.

The unifying themes don’t just stop at the title. Queer Eye has a general sense of accepting differences, and they even push the boundaries on topics about extreme differences, such as the police’s relationship with the black community, as well as Christianity’s relationship with the gay community. They handle these topics in a way that shows that it’s possible to talk about these things in a respectful manner, and it sheds light on the fact that a lot of our misunderstandings with these subjects are because of a lack of conversations between the two communities. The show also does well at showing that they aren’t easy conversations to have, but that having the openness to listen can go a long way. Of course, the show isn’t saying that we always have to agree with those who are on the other side (especially when it comes to issues of racism, sexism, and homophobia), but it suggests that we at least have these tougher conversations so we know how each side feels about any given issue.

Aside from all of the positive representation and political commentary in Queer Eye, the main content of the show itself is uplifting in a way that is very much needed, especially in reality TV. It’s not about changing these men to the point where they’re entirely new. Rather, it focuses on putting them on the right track to improve their lives. The Fab Five has their opinions about what they should do, but they ultimately give the guys they’re helping the agency to make these changes in a way that feels comfortable to them. This is a much more positive take on the concept of a make-over, showing that making changes in your life is less about becoming a new person, and more about simply brushing some dust off your shoulders. It portrays that all of us are already beautiful, wonderful people, but we just have to extend that beauty to how we treat ourselves.

I think Queer Eye is so important, not just because of it’s positive LGBTQ+ representation, but also because of powerful messages about self-love. I feel that some people think taking the time to indulge on things that The Fab Five focus on can make us seem vain or self-centered, but I love that the show reminds us that it’s okay to do these things to promote positivity within ourselves. We don’t have to feel vain about using a face mask every once in a while, or making sure our hair looks good, or even just making sure our clothes show off our personal style, because how we love ourselves can say a lot about the love we put into others. The show is empowering in a way that is so modern, and so relevant to so many different communities, that no matter who you are, you’ll find yourself learning new ways to love who you are.

Queer Eye is currently available only on Netflix! Get in there, reserve some time for yourself to experience this delightful show, cry about how many feelings it gives you, and maybe fall for one of members of The Fab Five. Surely I won’t be the only one, right? Regardless, you’ll have no regrets.

This reminds me of the time I went to a bear bar and one patron got real mean for no good reason 😬
Listen, we know you wanna call me a gay slur. Just call me the slur, it’s less work for all of us.
You’re welcome 😌
Setup is coming along nicely in my new office! Got some lights I want to set up and then it’ll be pretty much exactly where I want it 😌
👀 #BisexualAwarenessWeek
First haircut in Seattle baybeeee 💇🏻‍♂️
%d bloggers like this: