The ever anticipated Dream Daddy: A Dad Dating Simulator finally made its release after having to leap over several dad-sized hurdles, and let me tell you, I am beyond impressed with the game. What I originally thought would be just a silly dating sim filled with dad puns and jokes about “daddies” as a sexual fetish evolved into something so much more impactful. There’s such a level of LGBTQ+ representation that most games haven’t come close to displaying, and along with that, the story writing itself is well beyond what I expected it would be. My little gay heart was beating with so much joy, and it might not stop as long as this game continues to exist (even if my favorite dad rejected me. It’s fine and I swear I’m not secretly sobbing, right now.)

I jumped into the dating sim thinking I’d just be a gay dad who goes on dates with other gay dads, you know, because I guess I just assumed the developers might not think past the G in the LGBTQ+ spectrum. That changed immediately after I started making my custom Dad character, when I saw that they included the option to make him trans! That’s huge! I have a trans friend who actually cannot stop talking about this aspect of the game because it means just that much to him. It’s already tough to get any good representation for gay, lesbian, or bi people, and to see that they made an option to be inclusive of trans identities is beyond progressive, compared to other games. Even Damien, one of the dateable dads, is trans! That’s more possible trans representation than even some of the most progressive TV shows! 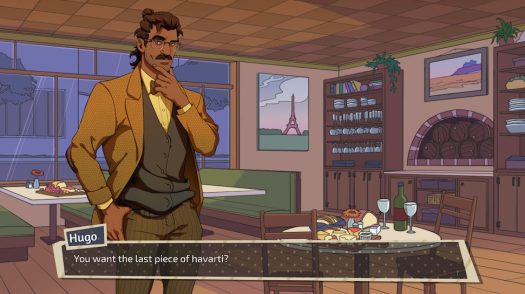 Something else I’ve found pretty game-changing about Dream Daddy is that none of the sexual orientations of the dads are explicitly mentioned. This could seem non-progressive, because it might seem like they’re avoiding representing specific identities, but in my opinion, it’s quite the opposite. Many of the dads talk about previous wives, relationships, and even current wives (oh, Joseph) and the protagonist of the game doesn’t bat an eye at it, whatsoever. The fact that they may be something other than gay doesn’t have any importance to whether the main character wants to pursue them, which is so much more progressive than most people are in the real life LGBTQ+ community. I’ve seen so many gay people not want to date someone who identifies as bi because they could “fall for someone of the opposite sex,” or because they think being bi is synonymous to being questioning (which is false), when that’s something that should have no bearing on whether or not we choose to pursue them. It was so uplifting to see that the game focused so little on whether the dad was gay, bisexual, pansexual, asexual, or anything else under the spectrum, and more on the fact that there are very apparent feelings between the main character and the dad of choice.

The thing that impressed me most is just how seriously the game takes itself, despite how silly it can get. We all expected to put a dent in our heads from face-palming at just how many dad jokes/puns there would be; that was a given. What I didn’t expect was just how serious the writers of this game took the story, and how the idea of men dating men was never the butt of the joke. Though TV shows, movies, and video games have gotten way better with how they represent same-sex relationships, they still manage to slip in something that makes their sexuality the subject of humor, which to me, is counter-productive for normalizing LGBT identities. I can’t even begin to tell you just how gosh darn pleased I am that this game is the actual best representation of LGBT people in a video game that I have ever seen. 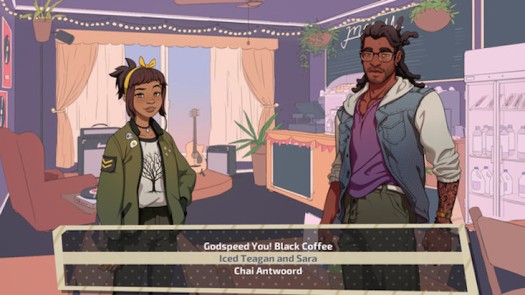 It was also so refreshing to see LGBTQ+ men as parents in this game without zeroing in on the fact that they’re not straight. Society seems to have this idea that being a non-straight parent is wildly different than being a straight one, and it ends up being reflected in a lot of media that we consume. Sure, a child may be raised differently by LGBTQ+ parents in the sense that same-sex attractions would be normalized for them, since they’d be learning by example, and there might also be a higher chance that they’d encourage more freedom when it comes to gender expression. Other than that, the actual parenting experience isn’t all that different. They change diapers, they get emotional about sending their kid off on their first day of school, and they pull their hair out about their teenager getting angsty, all in a similar fashion to how a straight person would. Dream Daddy did a perfect job of representing parents in the community, as it never calls to attention that these dads’ parenting styles have any relation to their sexual orientation. Even their kids treat it like it’s just a typical thing, knowing that their dad is into guys. They just treat it with the nonchalant attitude that it should be treated with, because it’s not a thing that needs to be treated like it’s anything out of the ordinary. 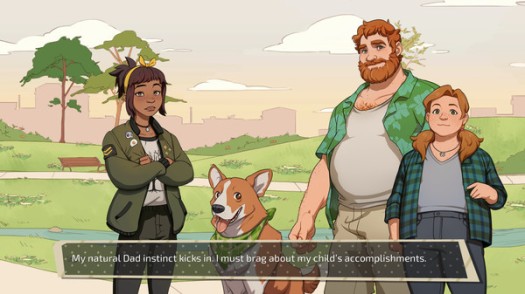 Aside from the positive LGBTQ+ representation, the story, dialogue, and characters are all so well-thought out, that it was just the icing on this dream of a cake. The characters are multifaceted and complex, the story takes twist and turns that I never expected, and some parts even get you right in the heart-strings. It felt so validating to play a game with such well-rounded LGBTQ+ characters that also had quality story writing, because more often than not, the quality of representation ends up taking a back seat to the quality of the content, itself. I’m so pleased to see that this game has great representation condensed into an entertaining story, because it’s really showing that you can have a successful video game that also normalizes same-sex relationships. It seems bizarre to me that you’d even have to prove that such a thing was possible, but regardless, It feels great to see that Dream Daddy made this impression in the gaming world.

Without trying to sound to hoaky or overly sentimental, this game is honestly a gift. I truly appreciate the work Game Grumps, Vernon Shaw, Leighton Gray, and the whole crew put into making this game with the kind of refreshing representation that it has. The way the game features the LGBTQ+ community is honestly one in a million, and it shows a great deal of consideration to us to show us in a way that doesn’t make us seem so different from the rest of society. With the overwhelming success that this game has gotten, I’m hoping that it can inspire other developers and gaming companies to put our community in the same kind of light.

Love making friends around the neighborhood 🥰
According to my calculations…you’re heckin’ cute. Always have been, always will be 🥰
Did sporty things for charity today and I CLEARLY had to look the part
“So uh, that yogurt you got there…you’re sharing, right? 👀” (yes, he got to lick the bowl)
Seattle was the perfect blend of hip, cooky, laid back, and warm (metaphorically speaking) and I have to admit, it’s charmed the absolute heck out of me.
Hey, mom. It’s been uh…over 4 years, now? I thought I wouldn’t cry about your loss anymore yet there I was, crying and sniffling my way through the SeaTac airport. (Not a fun experience, do not recommend!)
%d bloggers like this: