When legends die, hearts break all across the world. Not necessarily to the extent that their friends and families feel, who have to face the brunt of it, but in the sense that we’ve watched someone who left a stamp on this world, someone we thought would be timeless, be taken by death before we’re ready to see them go. It’s a hard fact to digest, whether we personally knew them or not. We often find ourselves still thinking that their presence is here, simply because we were so used to their talents shining through the darkness in our world. 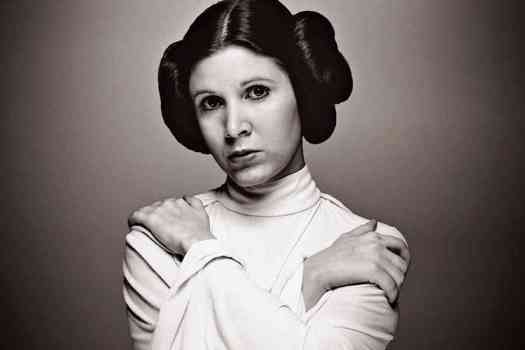 On December 27th, 2016, Carrie Fisher, the iconic star in the original Star Wars movies, passed away due to a heart attack. On-screen, she inspired little girls everywhere to believe that princesses are more than capable of saving themselves, and that being a lady in royalty doesn’t mean you can’t also be a badass. Off-screen, she inspired people to normalize mental illness and learn how to positively cope with it, continued to be a strong beacon of feminism, and treated her fans as if they were her own friends.

The next day, her legendary mother, Debbie Reynolds, a talented actress, singer, and performer who rose to fame with Singing in the Rain, passed away from what we all could only assume was a broken heart. She put smiles upon the faces of so many people, the most familiar one for me being her role in the Halloweentown movies. She was “The ultimate triple threat,” as I saw Candice Cayne say on Instagram, who dazzled the world with her boundless talent.

These were such tragic losses, and at such close proximity. They were two legendary ladies, both who touched the lives of countless people. The world is definitely feeling the lack of their presence.

Though I’ve been around for the deaths of so many other celebrities who had a profound impact on their fans (this year, especially) there’s something about these ladies passing that tugged violently at my heartstrings. I’m only loosely familiar with both of them, having seen Debbie Reynolds in one or two of the Halloweentown movies several years ago, and only recently learning about how much of a role model Carrie Fisher is, but that didn’t change the fact that their deaths got to me. Being artists and performers, both Debbie and Carrie poured their hearts into the public eye, and their work resonated with those who consumed it. Because performance is their line of work, and because the way they perform is going to take a place in someone’s heart, their death undoubtedly becomes something mourned by more people than just their family. They bridge the gap of familiarity through their artistry, which creates this sense that we know who they are without even having to meet them. It’s not quite the same as having actual conversations with them, but it’s enough to create a connection in our hearts and minds. It’s enough to hurt when we see them go.

When it comes right down to it, they’re people, just like us. Despite it being a normal part of life, death is a sad aspect of it that, without a doubt, we will all encounter. In Carrie Fisher’s case especially, though her role as Princess Leia offered an empowering piece of female representation in an era that desperately needed it, her off-screen story was one that resonated with so many people in a way that saved them from themselves. She destroyed stigmas around having mental illnesses, and helped people understand how to cope with those illnesses. Whether you wind up meeting her or not, if her insight saved you, you’re bound to have a space in your heart for her that could easily feel pain at the sight of her passing away.

Debbie Reynolds also had her fair share of philanthropy that she took part in, which surely inspired joy in so many people. She founded the Thailians, which was a charity organization that supported treatments for mental illnesses. She didn’t just create the charity, but she led it for a whole 60 years. And though their relationship had its rocky moments, the love between her and Carrie showed somewhat of a fantastical relationship between a mother and daughter, no doubt touched the hearts of many as they built their legendary careers in Hollywood.

You didn’t need to know Carrie and Debbie to feel the impact that they had on the world. You didn’t need to have a conversation with them to feel connected to their artistry, as well as the bits of their personal stories that they released to the public eye. You didn’t need to be friends with them to be sad to see them die, to feel that loss of someone that you looked to when you needed to be inspired, to feel confident, or to just feel something when nothing was going right. As public figures who did their best to leave the world brighter than when they entered it, all you needed was to feel that impact to feel any sort of pain from them passing away.

R.I.P, Carrie and Debbie. Thank you for putting smiles on our faces, confidence in our minds, and laughter in our hearts. The world will miss you both dearly.

~ I was busy thinkin’ ‘bout~
Excited to finally play through this game Soon(tm) 👀
Sooooo we’ve got silver hair 💃🏻
Happy #NonBinaryDay from a gay he/they who just got their hair cut recently 💃🏻
Happy #nonbinaryawarenessweek babes 💖
The baby boy and I are wish you a relaxing, snuggly, and fun-filled weekend 💖
%d bloggers like this: